Well many of you provided us with feedback regarding replacement of our dishwasher and today was the day for scheduled installation. There was an electronic message at home yesterday saying that our dishwasher would be installed tomorrow between 10 - 2 and that we would receive another message 30 minutes in advance of their arrival.

Well that call came through and about 45 minutes later we heard the truck outside.  The two installers were very polite and went right to work removing the old dishwasher.  Everything appeared to be going well and then the installer who was removing the old unit said, I don't want to scare you sir, but I don't think we are going to get the old unit out because it won't clear your new wood floor. 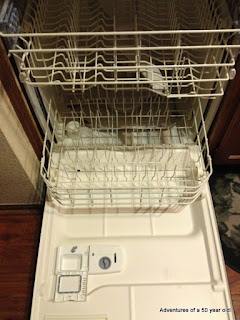 I was a little concerned about this because we had our parquet tile floor replaced with a floating wood laminate by our neighbor John about 18 months ago. The installers said that they would leave the dishwasher and come back another day once we had a chance to remove two rows of the wood flooring.  I called John to see if he might be able to help me remove the flooring while the installers were there and I got his voicemail.  As the installers were putting the new dishwasher in the garage John pulled up with his boat, just back from the lake.


John quickly helped me remove one row of flooring, which unfortunately resulted in damage to one of the floor planks, but at least there was room to remove the old and then install the new dishwasher.  Thanks John! 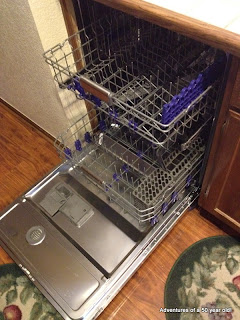 I always hate to run into these types of problems, which delay the installation and require more time and effort than should be necessary.  Thankfully the installers did not get away without finishing the job, although I could tell that they were not thrilled with being delayed, but did a good job none the less.

So the old is gone and the new is in place and it looks great and runs very quiet compared to our old unit.  Now I am actually excited to get it filled up with dirty dishes to give it a real test run.

Besides some yard work in the heat earlier, that is all of the excitement around here today.  Our thoughts and prayers go out to all of the individuals and their families who were affected by the senseless attack at the movie theater in Aurora Colorado.  I just can't comprehend why these things happen and I can only hope and pray that they can be stopped in the future. Thanks for stopping by, be safe and have a great rest of the weekend!
Posted by Kevin and Tracy (a.k.a. kcgaz) at 3:12 PM